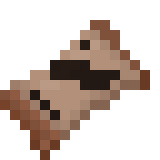 The MRE (Meal, Ready-to-Eat) is an edible item that can be consumed several times.

Just like most of the other food items in the mod MRE can not be crafted, only looted. MRE can be looted from Backpacks, Airdrops, Chests and Zombie Soldiers.

To eat a MRE, press and hold use while it is selected in the hotbar. It restores 7 (

) points of hunger and 3 hunger saturation. After consuming you will get back a "bitten" version of the item. MRE can be used 8 times in total.

Community content is available under CC-BY-SA unless otherwise noted.
Advertisement